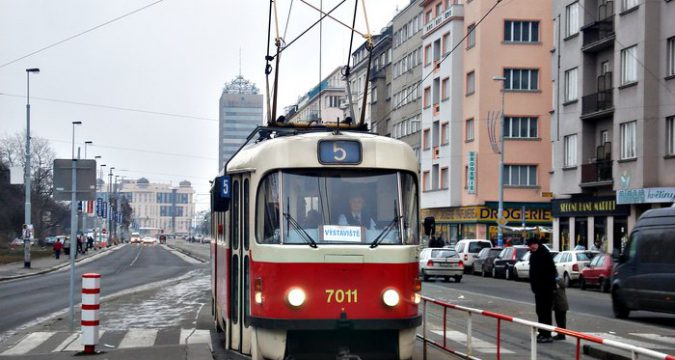 The tram line Prague Integrated Transport (PID) number 5 can be encountered in the capital for practically 114 years. It hasn’t been canceled in that time. It was gradually replaced by different types of tram cars running in both “solos” and sets. It is also worth mentioning the operation of the so-called “double-eyed” vehicles with a medium input, which were present on the “five” from approximately 30 to 50 years.

Since May 14, 1900, electric companies have introduced a tram line, operated by green cars and marked with blue reflectors, on the route: Karlín (Poděbradova ul.)- Na Poříčí – Josef Square – Na Můstku – National Theatre. The operation was determined by a week-long, marking of tickets with the letter K. The establishment of this line occurred after the electrification of the last section (Karlín – Josefské Square) of the first horse track. Already on June 17, 1901 came the extension of the line from the National Theatre over the Bridge of František I. (now the Legion Bridge) to Újezd and on to Malostranské Square. On 24 October 1907, the ‘blue’ line was newly designated by number 5. Not long after, on December 7, 1907, there was an extension of the route from Malostranský nám. to Klárov, replacing the shortened tram line number 7 in the given section. Already on September 27, 1908, the “five” from the final Poděbradov ul. began to go to Palmovka on the former line of the Křižík railway Prague – Libeň – Vysočany, where at the same time it replaced tram line number 13.

The extension from Klárov to the final Čech’s Bridge took place on October 19, 1908 and on the opposite side, this time from Palmovka to Vysočany already on November 15 of the same year. Thanks to the construction of the tram line to the Royal Castle, the “five” since 30 January 1910 got into the route: Vysočany – Palmovka – Na Mústku – National Theatre – Klárov – Royal Castle. Section: Klárov – Čech’ s bridge was replaced by tram number 12. A year later, on January 21, 1911, the route was divided into two branches. The first led through the section: Vysočany – Palmovka – Royal Castle and drove all week until about 23 h. The second had a route: U Deutschů – Palmovka – Royal Castle, while riding in a slightly altered form in the centre of Prague and with a week-long half-night traffic range from about 23 h to 01 h. After the tram line to Pohořelec was put into operation here on 22 December 1911, line number 5 was extended. On the opposite side came an extension from the existing final Vysočany to kolben’s factory from 13 June 1912, where tram trains were run only in daily operation.

Already on July 15, 1914, the “five” had a route: Kolben’s factory /Czech-Moravian/ U Deutschů – Palmovka – Klárov. Section: Kolben’s factory – Klárov there were weekly services, on weekdays there were also connections: Czech-Moravian – Klárov and finally the section: U Deutschů – Klárov was served only in midnight traffic (i.e. after 23 hours). On weekdays in the evening, on Sundays and public holidays there were also daily services on the shortened route: Czech-Moravian – Balabenka, the cancellation of which occurred on 26 July of the same year. As recently as July 15, 1914, the route was shortened from the Royal Castle to Klárov, with tram line number 1 replacing it in that section. As a result of the mobilization, the half-night traffic was cancelled from July 28, 1914, and at the same time the tram line described by us took the form of: Kolben’s factory – Palmovka – Klárov. Before long, on December 1, 1914, the “five” again had two branches: I. Kolben factory /Czech-Moravian – Balabenka – Klárov and II. Czech-Moravian – Balabenka (the scope of operation was the same as after 15 July 1914). Midnight traffic has still not resumed.

About 1924 – Three-car line number 5 set headed by ev. No. 433 at the Victory Class stop at the end of the current Legion Bridge – Postcards from the ensemble “A Look into History”, collection by Zdeněk Liška

From May 21, 1919, the branch in The Bohemian-Moravian Region was abolished, where the newly introduced tram line number 25 began to run. It was not until July 1, 1921, that the “five” introduced daily and midnight traffic. Two years later, exactly on July 29, 1923, it had a modified route: Kolben’s factory – Chotkova street (the stop was probably located in the area of Újezd) – Pilsen street – Western (now Smíchov) railway station. Section: Klárov – Újezd replaced the existing tram line number 7, on the contrary, in sections: Újezd – Pilsen street and Pilsen street – West Station was paid for by the “five” diverted lines number 9, respectively. 6. When the tram line to Hlubočepy was put into operation on November 2, 1927, the line described by us was extended from the Western Railway Station. As a result of the interchange of the end sections with tram line number 15, from 3 January 1932 there was a departure from Balabenka to the final Hloubětín and Kolben’s factory was newly used by line number 15. As a turn of war, the scope of operation was limited to daily on 9 February 1942, but on 17 December 1945 the night operation was introduced.

The route was shortened by a section: Hlubočepy – Distillery took place on January 28, 1969, but long-term shut-offs on the line to Hlubočepy have been going on since 1967. From January 26, 1970, the “five” began to go again to Hlubočep, but only at night. By contrast, tram lines 4 and 12 were closed during the day in Hlubočepy. As of June 30, 1973, the resumption of daily operation of the line described by us in the section: Distillery – Hlubočepy, where lines 4 and 5 used to run. Exactly three years later, on June 30, 1976, the “five” was extended along the newly built line to The Black Bridge (now Lehovec). In connection with the cancellation of the tram line in Na Příkopě Street, on 4 July 1985 there was a change of trace in the city centre: Black Bridge – White Swan – Central Railway Station (now Masaryk Railway Station) – Wenceslas Square. – National Committee – Perštýn, May – Hlubočepy.

Major changes in Prague’s urban transport brought with it the commissioning of metro section I. B (Smíchov Railway Station – Sokolovská, now Florenc), which occurred on November 2, 1985. Changes in surface transport came into force a day later, i.e. 3 November 1985, and from that date there was a “five” in the route: Black Bridge – Palmovka – White Swan – Republic Square – Embankment cpt. Jaroš – Park of Culture (now Holešovice Exhibition Centre) – Fučíkova (now Holešovice Railway Station) – Trojská – Ke Stírce – Kobylisy Road. The scope of operation was set at daily and weekly, as night transport was provided by the newly introduced tram lines 51 – 58. Five years later, on November 23, 1990, the line described by us was running from Lehovec (originally The Black Bridge) via Harp to Palmovka and through Ohrada, Olšanská street and the Main Railway Station on Republic Square, from where it continued to the Kobylisy Road. This modification was triggered by the extension of metro line B to The Czech-Moravian Region and at the same time by the commissioning of the Palmovka – Ohrada tram line.

Since September 15, 1992, the “five” has been shortened by a section: Lehovec – Harp due to reduced use. Before long, on January 4, 1993, an extension came from Harfa to Hloubětín, which was served by tram line number 5 only by selected services during peak working days. During the operation of metro line B to Black Bridge on November 9, 1998, the “five” changed its route: Kobylisy Road – Ke Stírce – Trojská – Strossmayerovo Square – Republic Square – Main Railway Station – Lipanská – Flora – Olšany Cemeteries. In this form, it remained for another five years.

Another change of tram line number 5 meant adjusting the route to the form: Olšany cemeteries – Flora – Main Station – Republic Square – Strossmayer Square – Vltavská – Dělnická – Holešovice Railway Station – Exhibition Grounds (now Holešovice Exhibition Centre). The date of that adjustment is indicated on 11 October 2003, which was affected by the closure of the tram line closure in Senovážné Square. It is also worth mentioning the fact that in modern history the route “five” was often diverted from Masaryk Railway Station through the stops White swan and Těšnov to the Vltavská stop, from where it continued along its regular route. The reason for these diversions was the closure of tram lines or work on the construction of the Blanka tunnel. Another permanent change, coming into force until 1 September 2012, brought with it an extension of the route: Divoká Šárka – Dejvická – Hradčanská/Špejchar – Sparta – Strossmayer Square – Republic Square – Main Railway Station – Flora – Olšany Cemeteries – Želivského – Černokostelecká. Section: Divoká Šárka – Sparta only used selected services on weekdays in the morning and afternoon. The others were terminated in the skewer. Before long, June 29, 2013, it took on its present form: Podbaba – Hradčanská – Malostranská – Čech’ s Bridge – Republic Square – Main Station – Flora – Želivského – Černokostelecká – Central Workshop Public Transport. It is worth mentioning the fact that in the section: Černokostelecká – Central workshop Public Transport “five” replaces tram line number 7.

Tram line number 5 is the second oldest in Prague with a relatively small number of changes. Unlike others, it has not been cancelled once or has there been a long-term interruption in its operation. It can also be seen from the above text that it has a lot in common with tram line number 7, not only at present, but also during the first period of the Czechoslovak Republic.